I visited this #Holocaust exhibit in August #Maine recently, at the Holocaust & Human Rights Center of Maine (HHRC). In Augusta, Maine (@HHRCMe). “Our Stories Must Be Told” is a very moving exhibit, which I highly recommend.

If you haven’t yet, come check out our latest exhibit, Our Stories Must Be Told, at the Michael Klahr Center on the UMaine–Augusta campus. The exhibit features artifacts from the Holocaust. pic.twitter.com/lxmsH6JiI8

Their staff couldn’t have been more welcoming despite my having given them such short notice of my visit, and I was able to meet with Phil Fishman, Office Manager, and Shenna Bellows, Executive Director.

The center was founded in 1985, with Gerda Haas, Holocaust survivor and author of Tracking the Holocaust and These I Do Remember: Fragments from the Holocaust, as its founding director. The permanent home is the Michael Klahr Center on the U. of Maine campus in Augusta, appropriately nestled next to the library.

The center has a focus on education, and has slowly grown since its founding, despite ubiquitous budget constraints. This year, they reached almost 7000 students. One of the many things that impressed me was the breadth of their teaching about human rights and tolerance in general. They show how the lessons of the Holocaust are applicable to LGBTQ people, the current immigrant experience, and civil rights. Perhaps one of the most important programs they offer to students is “Decision Making in Times of Injustice,” a timely reminder “that thousands of ordinary people participated in perpetrating these crimes, while thousands more stood by as quiet witnesses.”

With the family separation policy and the barbaric conditions in which asylum seekers at our southern border are being held, some of the artifacts were particularly poignant and painful. Children, separated from their families,  are being kept in freezing conditions, with inadequate food and poor hygiene. Donations are being turned away by Customs and Border Protection (CBP). Infamously, Sarah B. Fabian, a Justice Department lawyer, argued that the government had no obligation to provide soap, toothbrushes, or beds for the children.

Rep. Alexandria Ocasio-Cortez created a stir last week when she described the conditions as concentration camps, not without justification. While many have objected vehemently, I understand the analogy and that these detention camps are the beginning of the slippery slope that was seen in 1930s Germany.

For a more detailed perspective on the discussion of these detention centers and concentration camps, see Andrea Pitzer’s “‘Some Suburb of Hell’: America’s New Concentration Camp System” and Rabbi Danya Ruttenberg’s thoughtful perspective.

Given that backdrop, seeing some of the artifacts at the Maine HHRC’s exhibit was especially pointed.

My pics from the #Maine #Holocaust and Human Rights Center @HHRCMe visit today.
It is clear where we are heading. @AOC is right that these are concentration camps, heading towards outright genocide. Where are the responsible adults fixing this horror? pic.twitter.com/473HtzKKC0

This was a teddy bear a young teen, Clemence Zezette Larson saved. https://t.co/D7TeHyNtW1 She survived Auschwitz and the death march.
Coming home tonight and reading more horrors about the children in detention centers sickened me w foreboding https://t.co/cVJsBDYbff @HHRCMe 6/6 pic.twitter.com/CoRBZl38jT

The exhibits included other artifacts and history I was not familiar with. For example, there were books and materials to normalize Hitler. 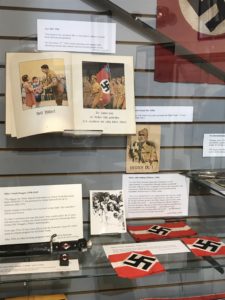 These included games with the swastika, described as “good luck” symbol. (Note: this symbol is used as such in India)

This was a teddy bear a young teen, Clemence Zezette Larson saved. 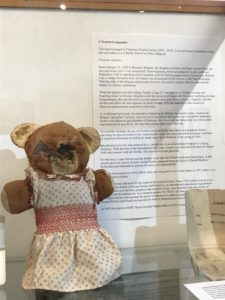 She survived Auschwitz and the death march. I found this particularly painful, as were the childrens’ shoes, here and lining the Danube at the Holocaust memorial in Budapest.

I commend the HHRCMe for their efforts not only to preserve history from the Holocaust but, as importantly, if not more so, to educate teachers and students about the need to speak up against “othering,” hate, and bigotry in any of its forms.

If you visit Maine, I highly recommend spending an hour or two at the Holocaust & Human Rights Center of Maine (HHRC), in Augusta, Maine.