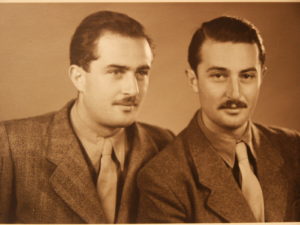 The surviving Glattstein brothers in Zennern, Germany, after liberation. c. 1946-7.

This map shows where Sanyi and Miki were during the war years. The third brother, Jenö, was disabled so was killed on arrival to Auschwitz.

Sanyi and Miki remained together throughout forced labor in Hungary and the Eastern Front. They were then imprisoned in Dachau and Mühldorf concentration camps. When Miki became deathly ill, they were separated for the first time.

Sanyi was liberated in Tutzing, then was in the Feldafing DP (displaced persons) camp. He subsequently found some of the sisters at Zennern and was reunited with them and Miki. They stayed there until they were able to emigrate to the US.

Click on markers on the map for additional information about the location and its significance in Sanyi's and Miki's lives.