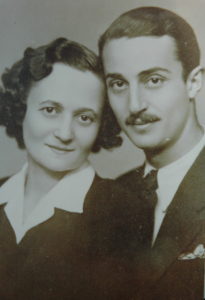 While Miki was in forced labor, then Dachau, this map shows where Magdus was during the war.

Amazingly, she walked on a death march from Reinikendorf to Rostock, at the North Sea, then after liberation, back to Oranienburg.

She eventually found her way back to Debrecen. Later, giving up on being able to resume life in Hungary, she joined family in Zennern, Germany, until emigrating in 1949.